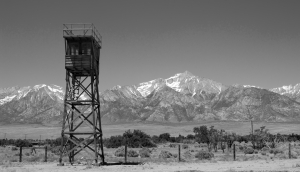 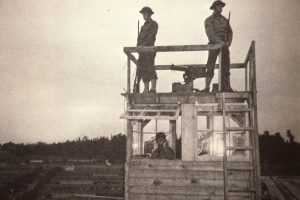 Security in Manzanar: The Guard Towers

Manzanar was surrounded by barbed wire and eight guard towers staffed by military police with searchlights and guns. The National Manzanar Historic Site recreated one of the Guard Towers in 2005.

Living in an area enclosed by barbed wire, guard towers and armed military police did not make the people living in Manzanar feel safe. Those people were not there for the Japanese Americans safety, but rather to keep them in line and inside Manzanar’s fences. Though rare, if one of the people got too close to the barbed wire, or did try to escape, there was always the fear they would be shot on site. No mercy spared because the United States government cared about one thing: keeping the Japanese Americans locked up in order to eliminate them as a potential threat.

Former incarcerees remember the guard towers and the feeling of confinement, reinforced by the “guns facing in.” Manzanar prioritized the guard tower reconstruction because it is such a powerful symbol of the incarceration experience.

ACTIVITY 8: If you lived in camp, how would being surrounded by guns, towers, and barbed wire make you feel? How do you think it made the Japanese Americans feel? In a few sentences, tell us.